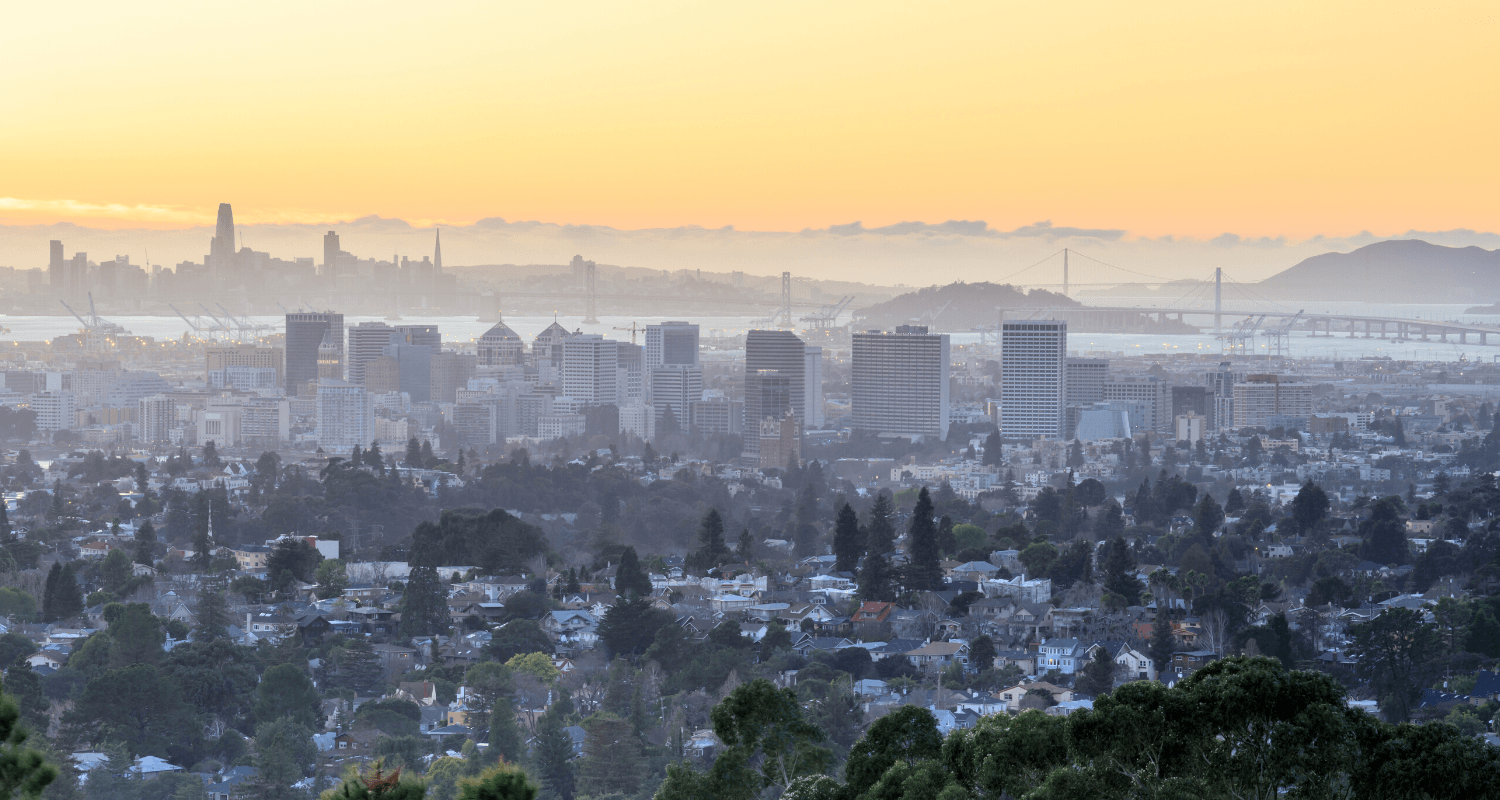 Buyers shopping for homes in Oakland love the microclimate (it’s generally about 10 degrees warmer in Oakland than it is in San Francisco, which is notorious for its fog and chill) and access to more affordable homes.

But “more affordable” does not mean “cheap,” and if you’re looking for the craftsman bungalow of your dreams in the East Bay, you’re up against a lot of competition from other buyers.

We talked to experts in Oakland real estate with decades of experience buying and selling homes in the area, scoured the diverse neighborhoods, and did the math to find the best recommendations for your budget and lifestyle. This comprehensive guide will walk you through what you need to know about local house features like seismic upgrades and where buyers are having the most luck finding homes that meet their needs.

Know the housing in Oakland

In Oakland, “The sense of community is high — more than anywhere else in the Bay Area,” says Heidi Mueller, a local agent with 31 years of experience who’s sold 79% more properties than the average real estate agent in the area. “People like Oakland — they like the weather, they like the activities, they like the neighborhoods. It still feels neighborhood-y. People walk on the street and they know each other and watch out for each other.”

Mueller says that in many ways, Oakland has become what San Francisco used to be. “There are so many different things to do that it makes Oakland very popular,” and the tech presence in the area draws a lot of buyers to Oakland who might not have been thinking about buying there.

Oakland’s proximity to San Francisco and the other tech centers of Silicon Valley is a boon for diverse cultural and event offerings across the whole region — but it’s also a major influence on home prices and inventory. Consider that San Francisco is home to the most billionaires per capita in the world — one per every 12,000 residents, according to Money. (Let that sink in.) These days more than ever, Oakland is a city where bargains are hard to come by — and competition is fierce.

In terms of home design, “The biggest trend is that people are appreciating mid-century modern in Oakland,” right now, says Benjamin Kimmich, CEO of the East Bay-based construction and contracting firm Axiom Build. “A more minimalist modern is really popular right now. People try to keep a typical craftsman style if a house already has it.”

If a buyer is looking to put in some of their own work after purchase, then kitchens, bathrooms, painting, and floors are sound investments. “Any of the money you spend there, you’ll be sure to get it back if you ever sell the house,” Kimmich says.

Kimmich also advises that buyers check to see if the home has attic space where you can blow in some insulation, “which is a great — cheap — way to save energy.”

When buying a home in Oakland, make sure to consider issues specific to the area — and make sure your home inspection is covering a search for those issues.

Kimmich cites the top three areas of concern as seismic, plumbing and electrical systems, and heating and cooling systems — in that order.

“A lot of the houses built in this area were built in the ’30s, ’40s, ’50s, and you’ve got galvanized plumbing,” Kimmich says. “Having a really old electrical panel that might cost several thousand dollars to upgrade if you want to do any remodeling is something you want to be aware of,” when inspecting and purchasing an Oakland home.

In terms of necessary seismic retrofitting, homes in your search may — or may not — have these upgrades already in place. “I’d say in upper-end neighborhoods, about 60% to 70% of homes have already done it,” Kimmich says. “But when you start to get to the lower end of the market, it’s probably only like 20% or 30% — so a lot more of those actually need it.”

In short, pay careful attention to this fact during inspecting: “Usually in the home inspection, there’s a few comments about the state of the seismic structural systems, so it would definitely be good to look at those and make sure you understand what the observer is inspecting and recommending.”

If seismic upgrades have not yet been made to a home, it’s something a buyer must consider as part of their total budget package, Kimmich says. “It’s usually less than $15,000 and it’s the best way to try to protect your investment when you consider what Oakland homes cost,” he says. “From a functional standpoint, that’s a no brainer.”

What’s your budget in Oakland?

If Oakland was once a place to stretch a budget, it’s hardly a place to find bargains anymore.

“To the chagrin of a lot of people, the market has gone up quite a bit — more than what people expect, says Mueller.

She notes that areas such as Adams Point or Lake Merritt are very popular. “Whereas as late as 2013, maybe you could get something for $300,000, you’ll have to spend a minimum of $500,000” now for a one-bedroom condo in these areas.

Get the lay of the land in Oakland

Architecturally, Oakland is home to the glorious Paramount Theatre (a National Historic Landmark built in 1931), and the Fox Theater (1928). Outside of its significant buildings, there’s expansive green space and parkland in Oakland: The city has more than 80 parks. Locals’ favorite outdoor spaces include the Dimond District’s Sausal Creek trail; the Sibley Volcanic Regional Preserve, which was created by lava more than 10 million years ago; a secret rose garden tucked in a Piedmont residential neighborhood; and the expanse of Lake Merritt as a destination for exercise or social meetups.

When you look to buy a house in Oakland, consider that nearly every ethnic group is represented there; more than 125 languages and dialects are spoken within city boundaries, making it one of the top five diverse major cities in the country, according to data from the Visit Oakland tourism board. It’s also home to the third-highest concentration of lesbian residents within the U.S.. A harder-to-prove claim, perhaps, but one born out by even casual observation: Oakland may have one of the highest rate of artists per capita anywhere.

Mueller’s estimate for the entry price point for a stand-alone residence, she explains, might be found in an area like the Dimond District or Laurel District. She calls those “good, solid areas,” where “the houses are nice and the neighborhood is neighborhood-y.”

The Dimond District, in East Oakland about two miles east of Lake Merritt, is a cultural melting pot where Oakland’s hills join with flat real estate. It’s home to Dimond Park. It’s also highly accessible, with easy freeway access from the 580, and it’s a major AC Transit hub, including lines to San Francisco.

The nearby Laurel District is located just half a mile from Mills College. Running through its center is the lively MacArthur Boulevard, a popular shopping area that’s home to its share of annual festivals.

Fruitvale, Mueller notes, is another well-priced area to consider: It’s also gentrifying, and is convenient because it has a BART (Bay Area Rapid Transit) station.

West Oakland is a developing neighborhood, and commuters might find it desirable for its proximity to the San Francisco-Oakland Bay Bridge, and to a BART train that runs under the bay into the city. “There are new developments there,” Mueller notes of the emerging section of town. “New condos and townhouses.”

Mueller noted “mid-range” real estate can be found in North Oakland, near the shopping and dining street Piedmont Avenue. Think many craftsman-style homes, and price points in the $900,000 to $1 million range and up.

Temescal and lower Rockridge might be considered for similar charms and in a similar price category. Mueller calls them areas that are “really fun for younger people,” with a BART station, popular shopping street College Avenue, and “charming houses.”

For Oakland’s most expensive real estate, look to the hills, where Mueller puts the starting home values at $1 million and up.

Throughout the city, Oakland has “city streets where people like to hang out [and] still have that charming individuality to them — Piedmont, College, Lakeshore, Grant. They’re just fun to hang out and go and it’s not overwhelmed with chain stores.”

Tips for home buyers in Oakland

HomeLight’s housing transaction data for Oakland indicates that the worst month for sellers to move their homes is January, when they’re likely to fetch 15.15% less than the yearly average — so by the numbers, that’s the best time for buyers to jump.

That said, searching for a home in Oakland can be a nail-biting proposition year-round for buyers. “Because we have such a lack of inventory, any kind of seasonal pattern is pretty small,” Mueller notes. “It’s busy year-round.”

One reason for that, Mueller says:

“It used to be that when the kids grew up, homeowners downsized. But because of the market the way it is, they can’t really downsize to anything cheaper; downsizing would be to buy something the same or more expensive than what they’re selling and have less. So they’re not moving.”

More likely to sell in Oakland right now are first-time buyers ready to move up, people who are “solid earners” in the position to sell and buy in the same hot market.

As far as a buyer’s ideal strategy for being in the best negotiating position in Oakland? “Have the best agent you can have,” Mueller notes.

Of course, when the market is hot, inventory is low, and there’s so much tech money flowing into the surrounding area, competition is intense — and having a good agent will be critical to a successful negotiation for a homebuyer.

According to HomeLight data, there are 7,863 active real estate agents in Oakland, who move homes off the market in 57 days on average.

But the top Oakland real estate agents among that group help homebuyers purchase 1.7 times more homes when they’re measured against the average real estate agent in the city — and top buyer’s agents also save clients $78,657 on transactions. Plus, a top agent is essential to helping a buyer navigate specific local home-buying challenges in Oakland — like negotiating leased solar panels.

Ready to begin your search? Find a top real estate agent in Oakland through HomeLight and stay competitive in your Oakland homebuying search.