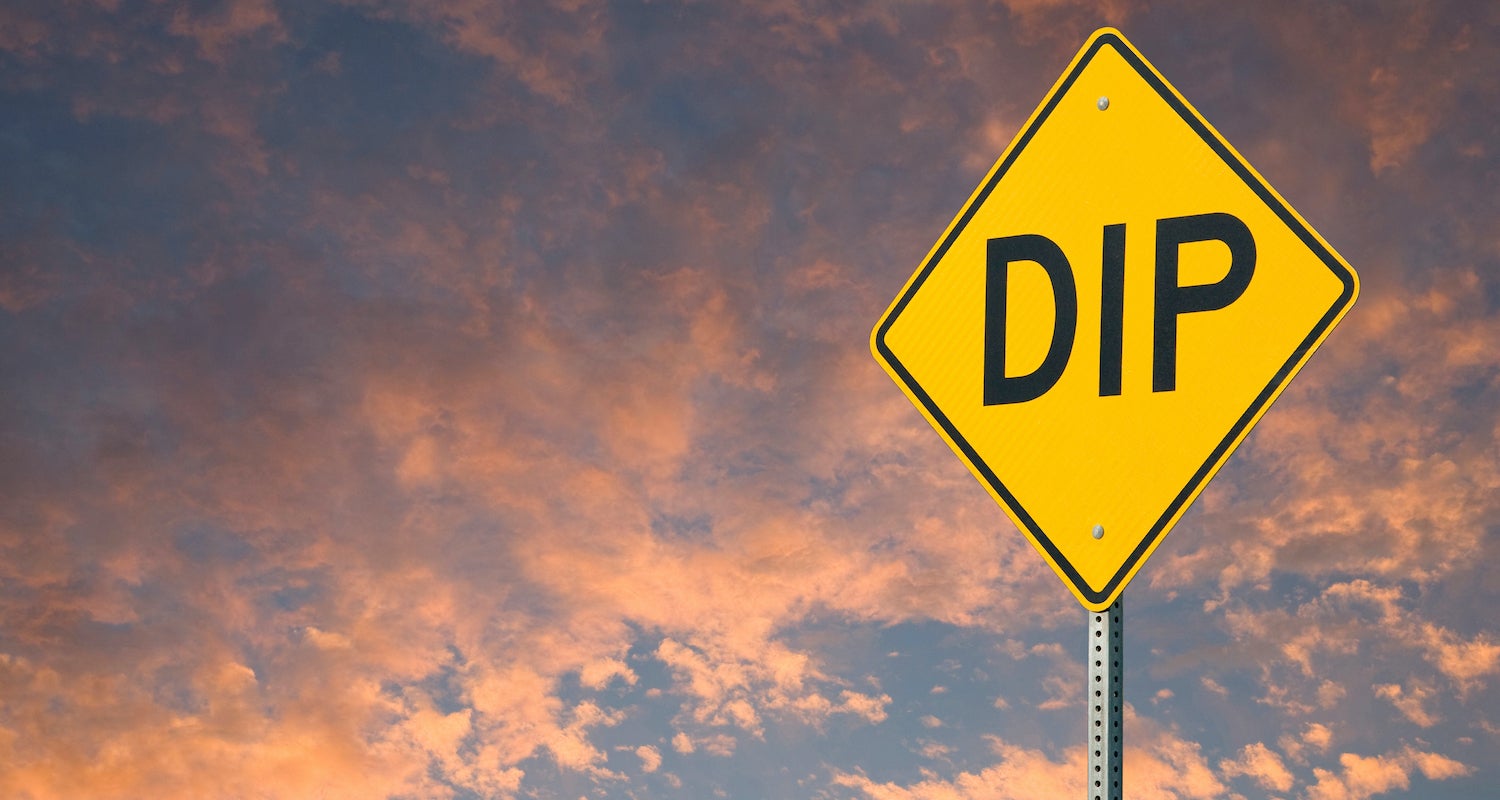 It’s been more than a decade since the Great Recession of 2008, and the housing market has rebounded nicely. We’ve seen at least one cycle including a seller’s market, when homes sell fast for higher prices — making it a difficult time to be a buyer.

If you’ve wanted to buy a house forever but prices are simply out of your reach, you might have considered waiting until the next recession to start your house hunt. Is that really a good idea?

To understand whether it is good to buy a house during a recession, and if we’ll see another recession like the one that hit us hard in 2008, we spoke to some top experts in real estate.

What exactly is a recession?

First, let’s dive into what a recession actually is.

Simply put, a recession is a time in which the economy stops growing.

According to The New York Times, which cites the National Bureau of Economic Research, an organization that monitors economic recessions and expansions, a recession is “a significant decline in economic activity” that is widespread and lasts several months.

Recessions are normal and inevitable, but they understandably make homebuyers weary. The job market becomes less stable, and lending standards become tighter, meaning buyers need to be confident they can weather any financial storms headed their way.

Most recessions aren’t strongly tied to real estate, but the 2008 recession definitely was. Most of us can clearly remember the 2008 recession, when home values suddenly plummeted, leaving an astounding 10.7 million American homeowners underwater on their mortgages (they owed more on their homes than what the homes were worth.)

Many people were forced to foreclose on their homes, leaving houses empty and allowing those in a position to do so to snap up houses for cheap.

“Recessions, such as the recent Great Recession of 2008 through 2010, depress home values,” says Gay Cororaton, director of housing and commercial research for the National Association of Realtors. “That’s because recessions lead to loss of jobs and income, and when people lose jobs, they won’t make a long-term investment such as a home purchase,” Cororaton explains.

In other words, when the demand for homes shrinks, home prices fall right along with it.

That’s a 25% decline in the median value of homes sold on the market during that time period. The aggregate market value of owner-occupied real estate plummeted from $24.1 trillion in 2006 to $18.1 trillion in 2011, wiping out nearly $6 trillion in home values.

“Inventory of homes for sale fell because homeowners don’t want to sell their homes at a loss,” Cororaton says.

What everyone wants to know — will the housing market crumble again?

If the median sales prices of existing homes fell 25% during the Great Recession — could that happen again?

“Not likely,” says Cororaton, “because we won’t have the tsunami of foreclosures this time around that we had during the Great Recession, when foreclosures led to a loss in home values, unemployment, and more foreclosures that just kept spiraling.”

Nearly 12 million homes were foreclosed from 2005 through 2012, Cororaton says, and the mortgages in foreclosure accounted for about 5% of all outstanding mortgages in 2009 through 2011. That’s because the underwriting standards were very loose in the run-up to the Great Recession, and there were a lot of risky products, such as balloon payment mortgages and a large proportion of adjustable-rate mortgages. “That is not the case today,” Cororaton says.

According to the Urban Institute, a nonprofit research organization, adjustable -rate mortgages (ARMS) accounted for as much as 52% of all new originations during the peak of the housing bubble. As of August 2019, Cororaton explains, ARMS comprised just 1.7% of new originations. The median FICO score for current home purchase loans is also about 38 points higher than the pre-crisis level of around 700.

The pros: Why you should buy a house during a recession

The first obvious pro to buying a house during a recession is that housing prices are lower, so buyers can afford to purchase homes that may have been out of reach for them before.

“Homes are cheaper during a recession, so that’s good for homebuyers if they have the financial capacity — income and enough savings — to keep making those mortgage payments even if they get unemployed for some time,” says Cororaton.

Mortgage rates are also likely to be lower during a recession, so buyers get the benefit of both a low interest rate and low prices, Cororaton explains.

“The people who bought during the recession, they did it based on the fact that there were so many houses for sale and the prices were coming down,” says Melanie Hunt, a top real estate agent with 38 years of experience in the Dallas-Fort Worth area. “They were trying to time when prices would hit bottom and would start back up. If they bought anytime in 2009, 2010, or 2011, their home values are up 30% or 35% today. So that was a very good decision for them to buy in the downturn.”

“The lenders were offering incredible deals, so in terms of the advantage of the buyer, buying in a recession is very good,” she adds.

An additional perk is that buyers during a recession may be able to ask for things they couldn’t ask for if they were buying during sunnier economic times, such as add-ons like furniture.

That’s generally unheard-of during a seller’s market, when negotiating powers favor the seller. “You can come in 5% lower, you can negotiate,” during a recession, says Hunt.

The cons: Why you should avoid buying a house during a recession

There are many upsides to purchasing a house during a recession, but there are some downsides, too — namely, the fact that as the economy weakens, the unemployment rate goes up.

Banks are also less likely to lend money during economic downturns, especially to those working in industries that are hit hard during recessions. “Obtaining a mortgage can be difficult as lenders might not lend to someone who’s holding a job that might not be there the next day,” says Cororaton.

You’ll also likely need to show proof of savings equal to several months’ of mortgage payments, meaning that those buying during a recession need to have a hefty nest egg already saved. “The banks are in stress, the lenders are in stress, so securing financing will be tougher,” Hunt adds.

After the Great Recession, federal mortgage regulations were tightened. “Those have loosened back up now,” Hunt explains — but they aren’t as loose as they were before, and for the most part, the days of buying a house with no money down are over.

It’s not just the financial aspect of home buying that can be tricky during a recession; there may be issues with the actual homes, too.

Because owners can find themselves underwater during a recession, or just unable to make mortgage payments due to loss of employment, buyers during a recession may find that there are title issues on the home from debts that the seller owes, complicating the selling process and making sellers unable to negotiate much on price.

Buyers may also find that desperate homeowners strip the home of essentials before putting it on the market, leaving them to make large purchases such as refrigerators, washers, dryers and other expensive appliances. Likewise, if sellers were unable to afford to maintain their home before putting it on the market, buyers may unknowingly wind up purchasing a home that turns into a money pit instead of an amazing deal (that’s one reason why home inspections are always recommended.)

In a downturn or an upturn, Hunt advises having a lender with a wide array of programs in order to find one that works best for you. “As a buyer, you need to find that experienced lender,” she says — especially when navigating the rough waters of home buying during an economic recession.

So, is it smart to buy a house during a recession?

The experts agree that buying a house during a recession can result in scoring a great value on a home that may have been out of reach during better economic times. But if you want to buy during a recession, you need to have:

If buyers can check all of those boxes, there’s no better time to buy than during a recession.