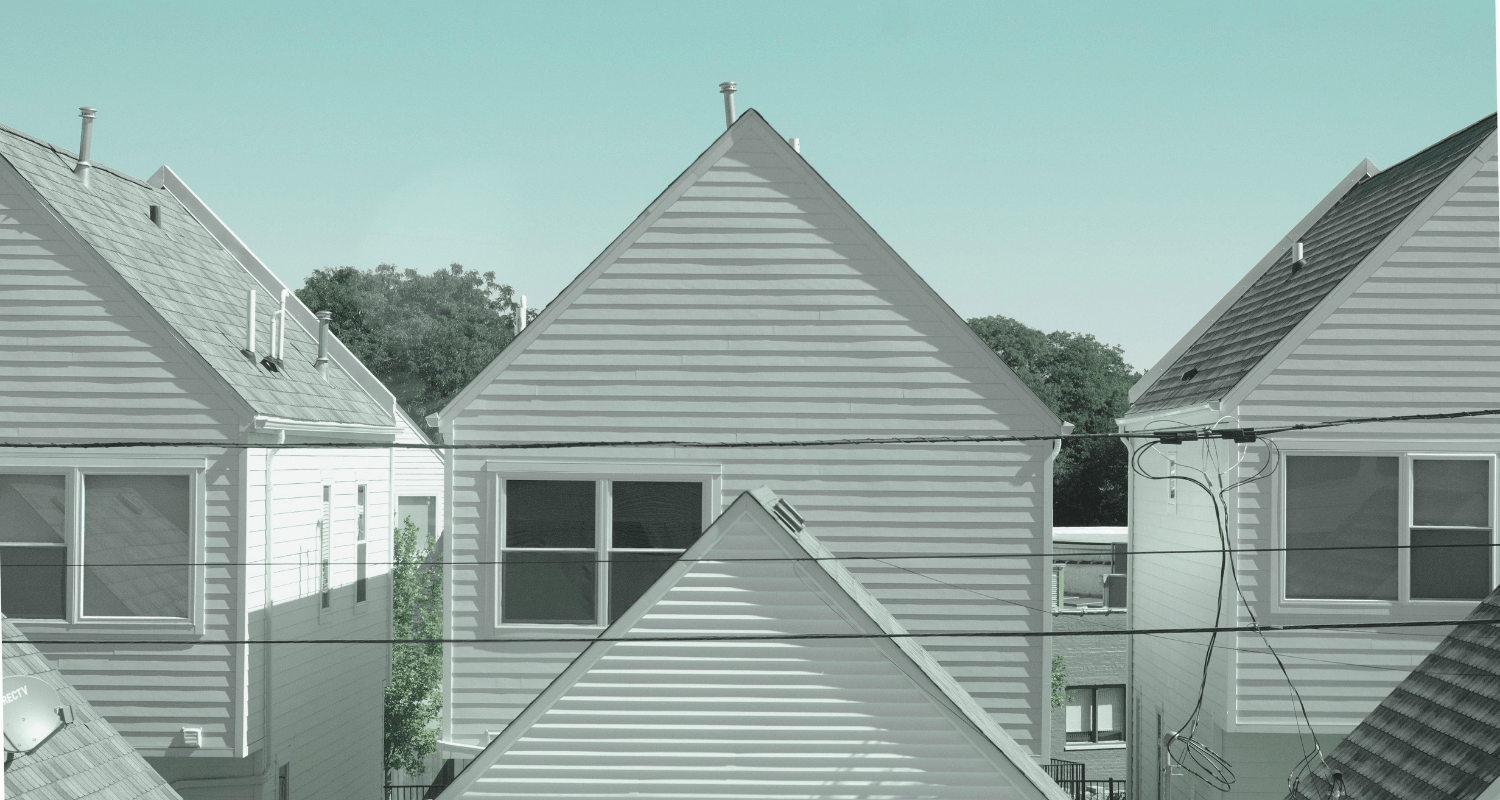 When Congress can’t come to an agreement on the federal budget, the U.S. government shuts down. Many federal workers are furloughed or have to work without pay, setting off a chain reaction across their departments that intensifies the longer a political stalemate goes on.

Over the past 43 years since the federal budget process was established, there have been a total of 21 shutdowns, an average of one every other year. The 2018-2019 shutdown was the longest in U.S. history lasting a total of 35 days. During this time, airports faced staffing issues, people in D.C. weren’t able to get a marriage license, and agencies warned that everything from food safety to national security was at risk.

Nevertheless, you might assume that the one thing that’d be safe from all the bickering in Washington would be the steady-as-a-rock housing market. And it’s true that it would take more than a gust of hot air from the debate floor to disrupt sound real estate economics.

But housing’s not totally immune to the effects of a closed government. To start, a shutdown can shake homebuyer confidence and block key steps in the loan approval process, creating delays or hiccups for people selling houses. Sellers could as a result face increased days on market or deal with their listing’s record as a “back on the market” property if a buyer backs out.

And while you can’t prevent another government shutdown, you can prepare yourself for the impact it could have on your home sale now or in the future by understanding these 5 fundamental effects.

Whether or not home sales could close during the lengthy 2018-19 government shutdown largely depended on the buyer’s loan type. For buyers with USDA mortgages or jumbo loans, the home sale proceedings stalled completely. 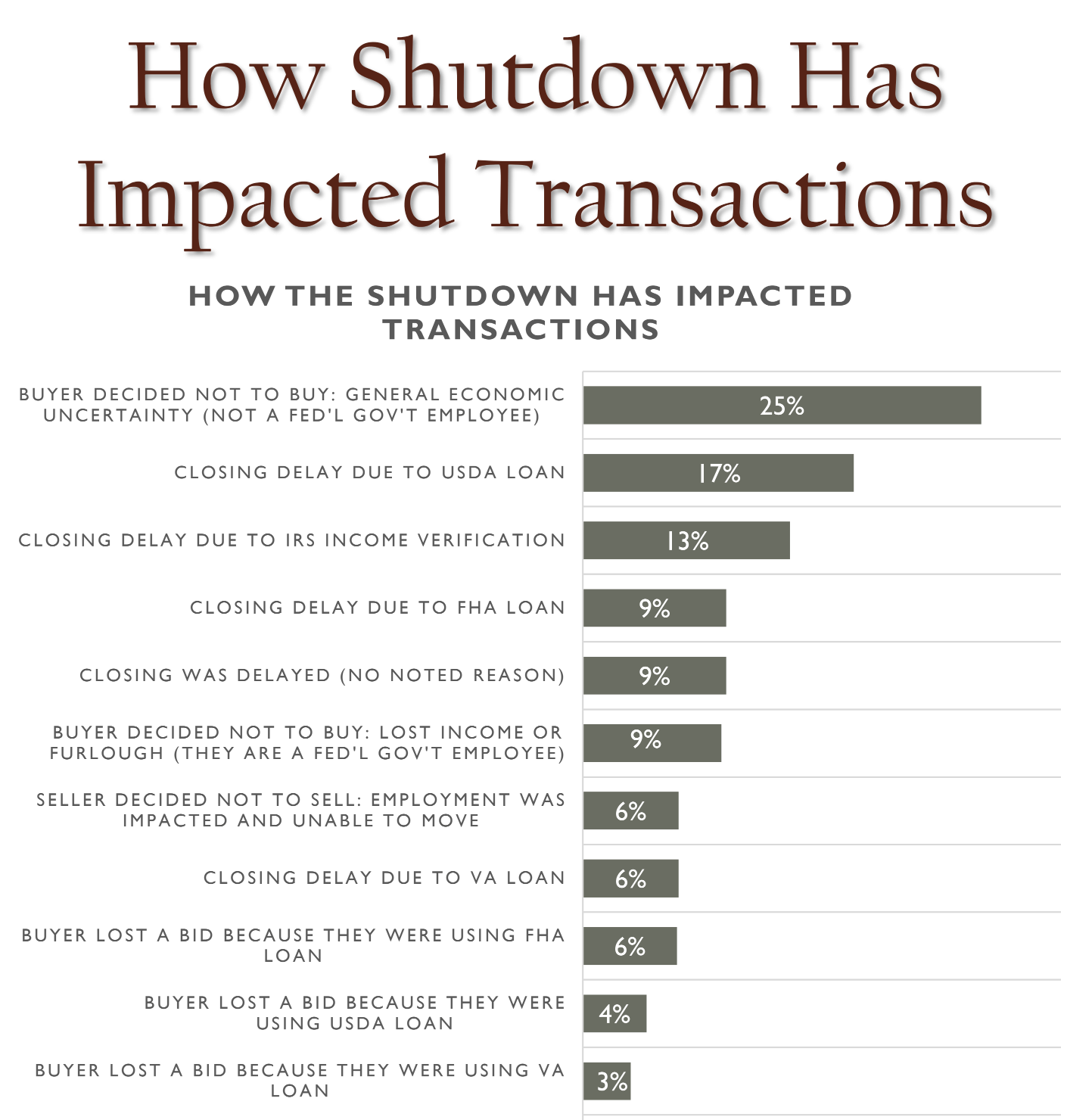 However, since USDA loans are aimed at low- to moderate-income families in rural areas rather than urban, and jumbo loans are necessary only when the loan amount exceeds maximum conforming loan limits for one-unit properties (which is $484,350 for 2019)—neither loan type is all that common.

“The main loan types that are affected by a government shutdown are USDA and jumbo. However, USDA and jumbo loans make up less than 1% of our loan originations, so for the most part, it’s business as usual,” explains Theresa Guettler, branch manager with Caliber Home Loans.

“On jumbo loans, we are unable to order tax transcripts, so these are delayed. However, USDA loans are the most dramatically affected. The USDA does not issue new commitments during a shutdown, so these loans are delayed until the government reopens. We are able to close USDA loans who have already received commitments prior to the shutdown, however, sellers in rural areas are impacted.”

So while a shutdown could stall a home sale indefinitely for USDA or jumbo loan buyers, only sellers in rural areas or those selling higher-end homes need to prepare for this possibility.

2. Loans underwritten by the government get delayed

The other loan types with the greatest potential for delays during a government shutdown are FHA loans and VA loans because these are typically underwritten by the federal government.

However, who underwrites these loans varies from lender to lender.

“Lenders whose loans are underwritten by the FHA or the VA would be delayed by a shutdown,” advises Guettler. “Caliber underwrites all of our FHA and VA loans, so this is not a problem for us.”

And even if the federal government is underwriting your buyer’s FHA or VA loan, that doesn’t mean they’ll automatically be delayed during every government shutdown.

Each shutdown is unique because the budgeting legislation is unique—meaning that various government programs and agencies may or may not be unfunded, partially-funded or fully-funded during any given shutdown.

For example, the Department of Veteran Affairs was fully funded throughout 2019 before the 2018-19 shutdown happened, so VA loans had minimal or no delays.

Whereas for FHA loans during the 2018-19 shutdown, it all came down to whether your buyer’s mortgage company was a delegated or non-delegated lender.

Non-delegated lenders must send their FHA loans to FHA underwriters for approval—a service not generally available during a government shutdown. So these FHA loans are put on hold.

Delegated lenders have the authority to approve or underwrite FHA loans themselves, so there typically aren’t any delays. However, if the lender has questions or concerns that require input from HUD before approval is granted, that can delay a loan issued by a delegated lender during a shutdown.

While conventional loans are less likely to experience shutdown-triggered delays (because they are not government-backed loans like FHA or VA), there’s still a possibility that their processing could be slowed.

“One issue that could come up with a government shutdown that buyers may not be able to get their tax transcripts to verify income from the IRS,” says Dean Ehrlich, one of the top 1% of agents successfully selling homes fast in the Coral Springs, Florida area.

However, mortgage companies are in the business of lending money, so many take steps to avoid government shutdown delays.

“Caliber modifies our verification requirements to minimize the impact of a shutdown on other loan types,” says Guettler. “The only conventional loans that are affected are self-employed borrowers if tax transcripts are needed.”

No matter what type of loan your buyer has, any delays caused by a shutdown can push the limits of a buyer’s mortgage rate lock.

If the buyer’s loan approval is delayed until after their lock-in period expires—and interest rates have risen above their locked-in rate—then they’ll likely have to accept that higher interest rate, which means agreeing to a higher monthly mortgage payment.

So how likely is it for mortgage interest rates to rise because of a shutdown?

“Mortgage rates are driven by the bond market and not really affected by a shutdown,” explains Guettler.

“However, after the first two weeks, it is estimated that for each week a shutdown continues, economic growth will be reduced by 0.1% to 0.2%. So, over time the negative impact from the shutdown could have adversely affected the bond market.  However, the Federal Reserve could offset this impact.”

A shutdown would have to extend for several weeks before it might pressure mortgage interest rates to rise—and even then it might not happen because so many other factors influence mortgage rates.

In fact, in the midst of the 2018-19 government shutdown, mortgage interest rates hit a 9-month low.

5. Reduced consumer confidence could cause buyers to back out

From the roofs overhead to the food on the table, the federal government has its hand in so many aspects of the national economy. So it’s not at all surprising that

consumer confidence gets shaken when the government shuts down.

Consumer confidence indexes are in part derived from the average household’s plans to make big purchases like a house within the next six months, so it’s a good indicator of real estate market trends.

So, when consumer confidence falls, chances are that demand for homes will fall, which will then cause home values to fall—which can tank your home sale if buyers get nervous or worry they’re committing to pay too much for a home with a falling valuation.

Buyers don’t want to pay more for your home than they have to. So if they see that a government shutdown is causing consumer confidence to fall, they may walk away from the sale in the hopes of getting a better deal if home values look like they’ll soon follow suit.

This whole domino effect of consumer confidence falling all starts with the fact that federal employees aren’t getting paid.

“Shutdowns affect federal employees, as their cash flow is limited,” says Guettler. “During a shutdown, they’re relying on their available lines of credit, so this can affect their ability to purchase a home.

Not only are federal workers not making big purchases like buying a house, they’re also spending less on a daily basis, which puts a dent in the overall economy.

When a shutdown is short, this economic impact is minimal. However, it can still put a damper on housing markets with a high percentage of federal employees.

“I didn’t run into any issues with the last government shutdown, however every market is so local,” says Ehrlich. “In real estate markets with a lot of federal employees, a government shutdown can certainly affect consumer confidence if they don’t get their paychecks.”

How long would a shutdown need to be before sellers are impacted?

Unlike the stock market, the housing market moves slowly so short term disruptions to the national economy—like a government shutdown—don’t make much of an impact. It’s only when they linger on that you need to start worrying.

And even though the 2018-19 shutdown was the longest in US history, it still didn’t cause much of a disruption or downturn in residential real estate. 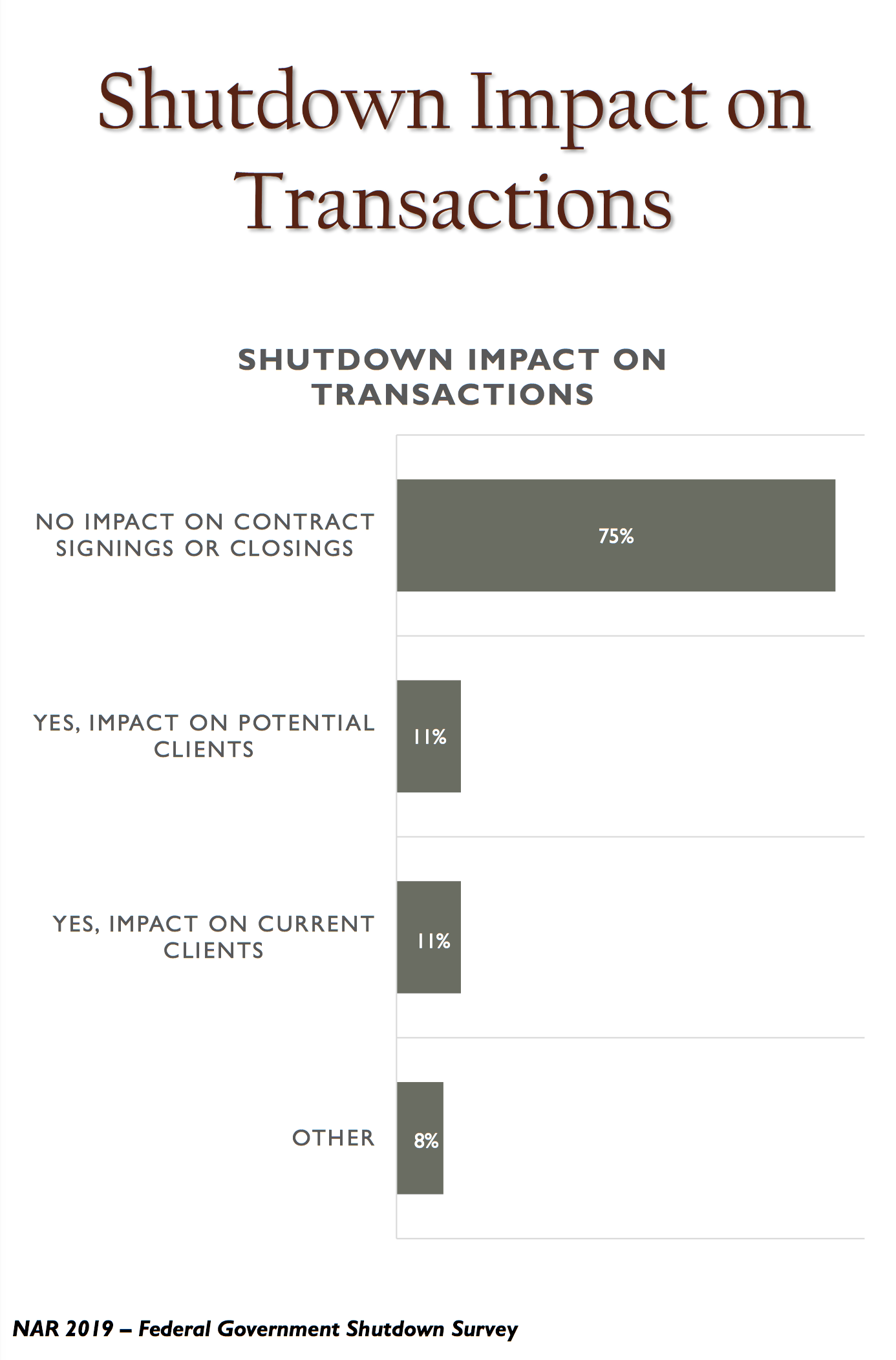 The good news is that 11 of the previous 20 shutdowns lasted fewer than five days. Which means that most shutdowns are too short to cause much disruption to home sales for most people—especially if their buyers are working with the right mortgage company.

“A government shutdown would primarily affect customers who are employed by the Federal government as their income is disrupted,” says Guettler.

“From a lending perspective, Caliber is a direct to Fannie/Freddie lender and we service our loans. Therefore we were able to modify procedures so that there was minimal impact on loan closings.”

Unless you’re selling in a market with a high population of federal employees—your home sale likely won’t be impacted unless the shutdown extends for several weeks or months. So in most cases, there’s no reason to postpone listing even when the country’s in the midst of a shutdown.