It’s no secret that the real estate agent commission cuts the biggest slice out of your take-home cash when you sell your home.

While only 8% of all home sales were FSBO (for sale by owner) in 2017, a report by the National Association of Realtors (NAR) found that 43% of those homeowners sold on their own because they didn’t want to pay the agent’s commission.

The problem with that logic is FSBO homes typically sell for significantly less than homes represented by agents. A home that sells for more by even a few percentage points can make up for the money you would have spent on commissions and then some.

Meanwhile, going it alone means you’re on the hook for all the work.

As explained by Kim Erwin, a top 1% agent in Corpus Christi, Texas:

“Sellers think they’re going to save money by avoiding the commission, so they sell their home a little bit cheaper. But are you really saving money if you’re selling your home for less than what you could’ve gotten with the right agent?”

Ultimately, you want to avoid going down a path based on your assumptions about commissions. Doing so could leave you up to your neck in legal contracts or leaving money on the table with a buyer who takes you to the cleaners.

Here we’ll pull back the curtain on what a real estate agent does to earn their commission, and even break down what they make by the hour (you’ll be surprised!)—with so much on the line, you need to go into this process with your facts straight.

The U.S. Bureau of Labor Statistics reports that the average income for real estate agents is $60,000. Does that mean agents only need to sell four homes a year to make their annual income?

For starters, your agent isn’t getting that whole 6% commission. That commission is actually split with 50% to the seller’s agent and 50% to the buyer’s agent.

Technically, yes. But they’re not putting all of that money into their own pocket.

Every home sale transaction requires the involvement of a licensed real estate broker, who needs to be paid, too. How much of that 3% seller’s commission goes to the broker varies anywhere from 10-50%—which equals out to between $750 to $3,750 paid out to the broker.

After paying the broker out of the commission, your agent still has other overhead expenses to pay. There’s membership dues to real estate institutions like the NAR and MLS, and technology expenses like their website. 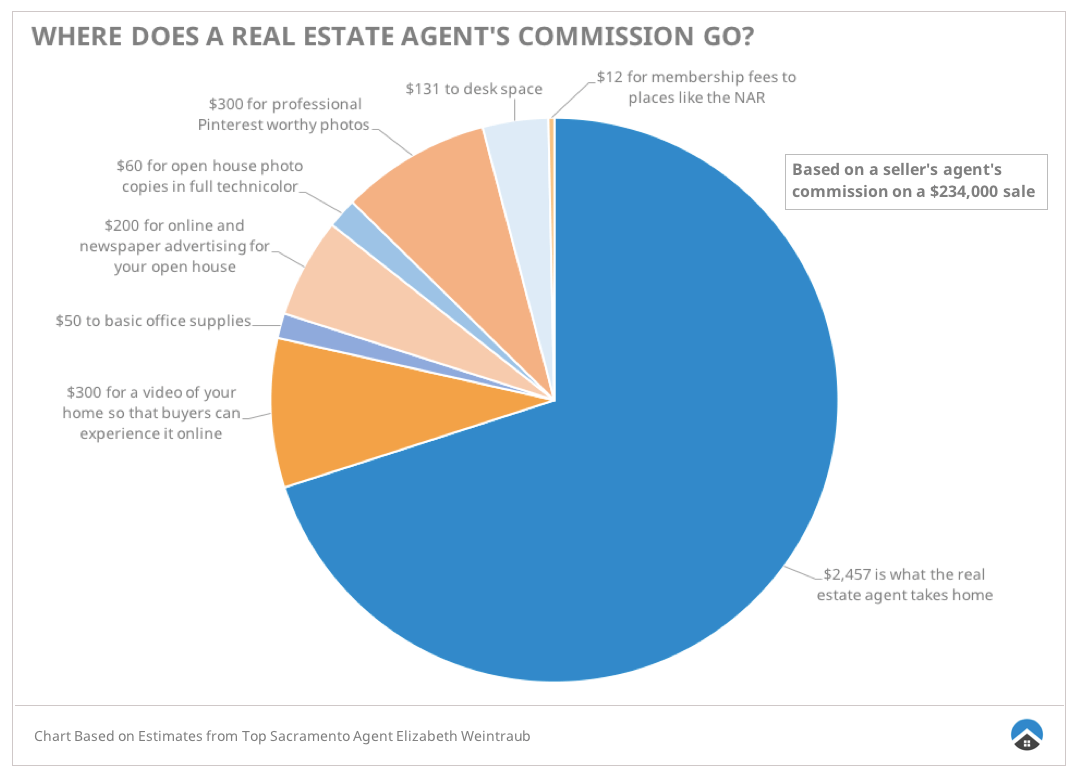 When you subtract all of an agent’s expenses from that 3% commission, the take home pay on your sale ends up between $1,000 to $3,000 total.

Divide that between the number of hours they’re working for you and that averages to around $28 per hour.

Fact #2: Your agent works for that commission behind the scenes

You may only spend a dozen or so hours total face-to-face with your agent throughout the whole home sale, but they’re putting in plenty of behind-the-scenes time into selling your home.

In fact, your agent is doing most of the work for you—without you.

Even before the first meeting with your agent—before even being formally hired for the job—your agent and employees spend time compiling a comparative market analysis (CMA) for your home.

With data from the CMA and observations from that first home viewing, your agent then works up a proposal with pricing strategies and potential upgrades needed.

Your agent does this work before your home is even listed in the MLS. After that, your agent spends time (and money) marketing your home, networking with other agents to find buyers, following up with buyer’s agents for feedback after showings, negotiating offers, and so much more.

And the work doesn’t end once you’ve accepted an offer. The best agents stay on top of the closing proceedings until the deal is done.

Look at almost any online seller’s net proceeds calculator and you’ll see that the agent’s commission rate is pre-set at a 6% rate. You’ll typically get an answer of a 6% commission rate from any real estate agent you ask, too.

But that doesn’t mean you’re obligated to pay a 6% commission rate.

There are no laws or regulations in the U.S. dictating the commission rates that agents can charge. This means that 6% is up for negotiation.

Recent studies on the average national real estate commissions show that the percentage rate is on the decline. Recent statistics indicate that the standard is actually closer to a 5% national average commission rate.

Does this mean that your agent is obligated to accept a rate of 5%, or that you’re getting ripped off if your agent insists on a 6% commission rate?

What it does mean is that the commission rate is up for negotiation. When you’re hammering out your deal, ask your agent if they’re willing to accept a lower commission, and have them ask the buyer’s agent as well.

Given all of the work agents do to ensure your home sells fast and for the most amount of money—you’ll find them to be worth every penny.

Let’s revisit the advice from top real estate agent Kim Erwin above, who said: “Are you really saving money if you’re selling your home for less than what you could’ve gotten with the right agent?”

Notice that she didn’t say “agent.” She put the word “right” in front of it.

There are over 2 million active real estate agents in the U.S. and likely tens of thousands in your metro area alone. You’d be foolish to hand over 6% of your home sale profits to an agent who wasn’t best in class.

You need a top real estate agent who comes with a powerful set of skills. They’re shrewd negotiators and brilliant marketers who can fetch you 1-20% more than your home in less time than the average agent.

Would you pay a commission if you had proof that your agent knew your neighborhood like the back of your hand, sells homes in fewer days and can get you more money for your biggest asset?

We can help with that. What we’ll do is match you with 3 top agents near you based on their actual performance history. From there, you get to pick the best one to meet your individual needs.

Then, you can stop thinking about commissions, get you home sold and move on to the next big thing in your life, whatever that may be!