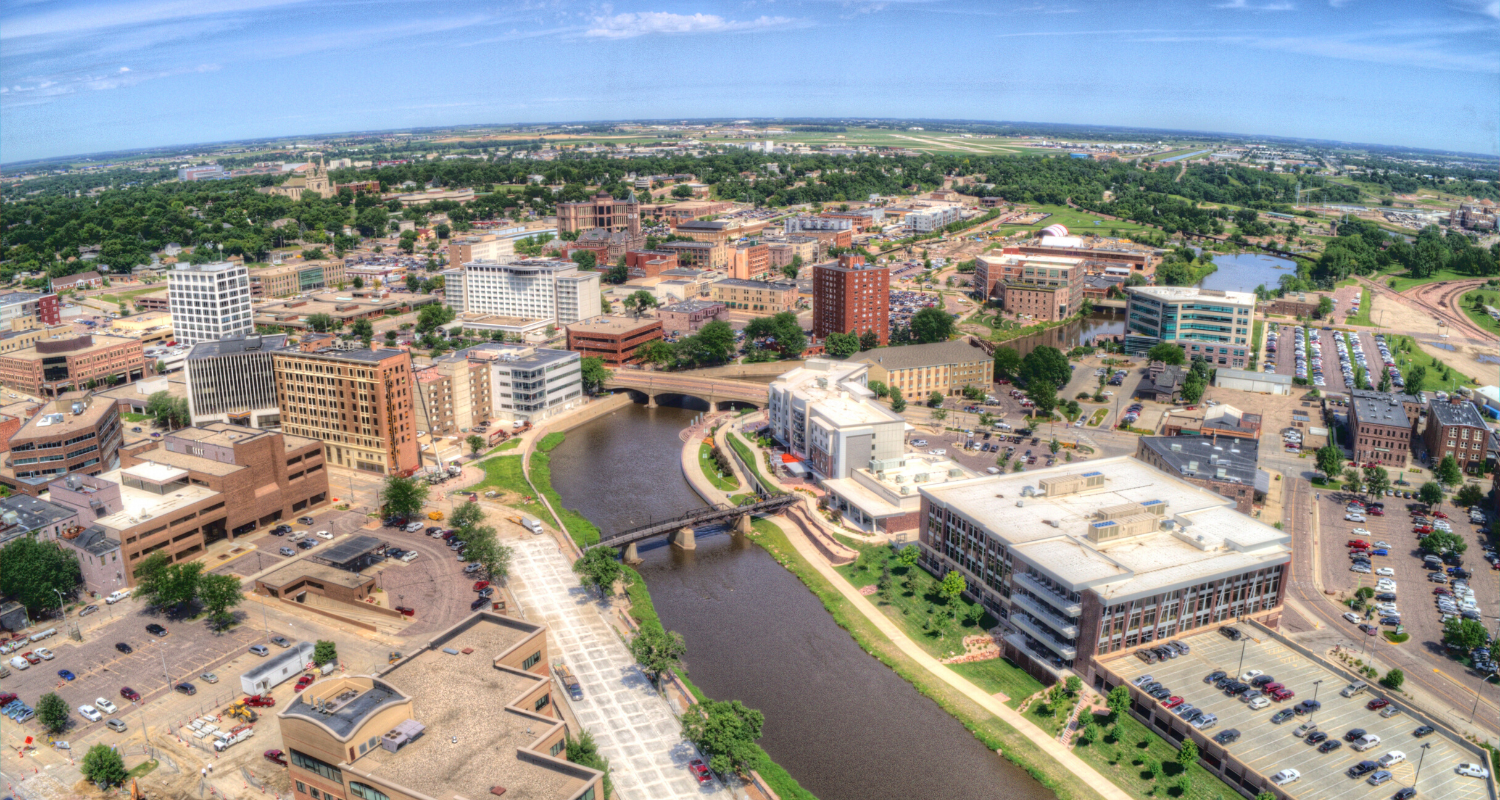 While the average Sioux Falls native might spend more time outdoors than in — at least for the less-frigid part of the year — they take their home buying every bit as seriously as hunting or fishing.

With a population that’s on average four years younger than the rest of the country, that may not come as a huge surprise. Growing families have lots to think about before signing on a house, including the school district, proximity to friends or relatives, the number of bedrooms, and the layout.

The experts we spoke to are calling the city a seller’s market with just a few months of inventory available, which is typical this time of year as they also say the best time to sell a house in Sioux Falls is in the spring, after the thaw. But the trend is far from seasonal.

Not only does Sioux Falls have one of the nation’s most resilient economies (it’s listed among the top-10 most recession-proof cities in America, according to CNBC’s financial site, Make It) but residential construction has nearly doubled in 2020 compared to the first quarter of 2019.

Contractors aren’t the only ones taking notice of this demand for housing. Real estate agents have, as well. Does a favorable market make unloading a house effortless? It’s not that simple.

We’ve crunched the numbers and spoken to the best in the biz to find out how to sell a house fast in Sioux Falls, so you can be all settled in to your new digs in no time flat.

Highlight the best features of your Sioux Falls home

Though it may sometimes feel like everyone in Sioux Falls knows one another, the metropolitan area has an impressive 250,000 people and sports an active and growing food scene (wine and coffee, too), top-notch public schools, three universities, and a booming job market.

The city’s core population has grown by 67,000 since the year 2000, with momentum to reach 208,000 people by 2025. This growth does indicate a strong demand for housing, but the rocketing rates of new construction mean that sellers don’t exactly have the market cornered. At an average price of $225,000, single-family homes in the area brush elbows with the national median.

Our favorite local agents point out that most houses in Sioux Falls were built no earlier than the 1970s, and as often as not you’ll find homes built well into the ‘90s and 2000s. Ranch-style homes — with three bedrooms on the main level — and two-story homes may be the most popular options for new construction, with many multi-level or 1.5 story homes built recently, as well.

Homeowners looking to sell can make the most of these trends:

Most couples approaching retirement age will choose townhomes, also known as twin homes or villas, which share a wall with their neighbors. Many of these are located in homeowners association (HOA) communities, where the association mows the lawns and shovels the snow for you, among other outdoor maintenance services. This also allows homeowners the freedom to spend a few months in warmer climates over the winter without worry.

Here’s what these trends mean for sellers:

They say first impressions are everything, and that holds true when selling a house — oftentimes, the first things that potential buyers see can set the tone for the entire showing. According to local agent John Anderson, if you’ve got a three-stall garage, you’re already a step up.

“Out here we like to hunt and fish, we like to have toys. We have boats and quads, so it’s great to have the extra space to store them safely,” Anderson says.

That doesn’t mean that a big garage, or a lack thereof, will make or break a sale. Other hot features named by Anderson include:

Top agents suggest that sellers let them know up front which they prioritize more: time or money. If a speedy turnover is the bigger factor, the property can be listed for a lower price to achieve a quicker sell. But ideally, agents recommend putting in the time, investing some capital, and reaping the returns.

Either way, homes should be fully presentable before they’re shown. “You should always have your home prepped and ready to go no matter what,” says Anderson.

Anderson says that light gray interior paint is very popular at the moment, and goes especially well with the stained trim and cabinets often found in homes from the 1990s and early 2000s. When we spoke to him for this article, Anderson had just recommended Sedate Gray to one of his clients.

If your home has white trim, try a light gray without any brown in it, and maybe some blue or green instead, says Anderson. These days, gray is not synonymous with boring. There is no shortage of shades of gray; you may be surprised at just how the perfect selection brings a room together.

Clean up the carpets or install fresh flooring

Again, with the rough Sioux Falls winters, salt, mud, and other debris can do a number on your flooring. Small businesses with a good reputation like Bob’s Steam Carpet or Dan’s Carpet Cleaning know exactly what they’re dealing with.

Everyone knows Sioux Falls is a family town, but it’s still unsightly to have toys littering the home and yard. “Unfortunately,” Anderson says, “you can’t really live your real life when you’re in the process of selling a house. Keeping the space clear is absolutely essential.”

Anderson also recommends installing new faucets and fixtures where necessary, and hiring a stager to make sure everything looks tip-top.

While some cosmetic updates can go a long way, Anderson says sellers should be honest with themselves about where and how they will invest their efforts.

“Some people think it will help that they put new flooring in the kitchen, when the flooring in the rest of the house doesn’t make the grade,” Anderson says. “So when they say they want to do one area, I say, ‘OK, but if you do this you’ve gotta be prepared to spend the cash and do the rest of it’ — and some people just don’t have the money to do that up front.”

When looking for how to price a home in Sioux Falls, Anderson recommends looking at “sold” listings similar to the property you’ve got up, as well as checking out what the next three months are going to bring. If it looks like there will be less inventory available, he says that it’s OK to add a little premium onto the listing price.

“But,” Anderson cautions, “you do not want to be chasing the market. So even if you see that a home recently sold for a certain price, if it looks like there will be more inventory you might need to price your home lower in order to be in the market rather than chasing it.”

In fact, Anderson says, the number one challenge for sellers in Sioux Falls right now is overconfidence, even if their property does check all the boxes as far as what’s trendy.

“People have high expectations,” Anderson says. “They saw what the market has done the last four and five years, but it’s not trending to increase as high as it was the last few years.”

“Basically,” he says, “people think their house is worth more than it is.”

That’s not to say that Anderson is seeing a major slowdown. Homes are still appreciating in value quite a bit — just not as rapidly as before, he says.

“Again, if you price your home too high, you’ll chase the market,” says Anderson. “It might sit there for 30 days, 90 days, 120 days, and then it has a bad rap. But if you’d just price it a little lower, it would be sold quickly. And besides for paying taxes and insurance for all that extra time, the home is valued even lower than what you could have initially listed it for, because buyers think there’s something wrong with the house, when really it was just overpriced.”

In Sioux Falls, social media is a particularly effective method of getting the word out about a hot property up for sale, because people living nearby are likely to let their friends or family know about it.

“Everyone wants to live close to their friends,” says Anderson.

So what can you do to be heard?

Different social media platforms offer different features that can be used to sell your house fast. Get familiar with Facebook, Snapchat, and Instagram for 360-degree social media exposure.

Facebook has a huge demographic and the ability to run targeted ads. Photo-centric Instagram can let you show off your home’s best features. And lively Snapchat can be a great tool for showing off little video clips of you enjoying what your home has to offer, and is also a fun way to grow your friend circle and expand your networks.

With 7,650 members — nearly 300 of whom joined in the last 30 days — the Facebook group Homes for Rent or Sale in Sioux Falls and Surrounding Areas is a great place to begin advertising your place. Keep an eye open for other local groups. Top agents in Sioux Falls have their finger on the local social media pulse and post regularly.

Sell your town and neighborhood, not just your home:

In the end, you’re selling your home’s location almost as much as its layout or other features, especially on social media where friends are encouraging their loved ones to move nearby. What do you love most about your neighborhood and community? Put it into words, and let the world know.

Partner with a top agent in Sioux Falls

Find a top agent in Sioux Falls now and get the best advice on how to sell your home quickly, and get top dollar for it at the same time.